A Family that Works Together

I grew up in a family where I have seen my parents work as a team. Not a single task at home was defined as a girl’s job or a boy’s job.

They were both working and so, financially independent. It was my mom’s decision to buy a new house. She chalked out all the financial planning based on the savings and expenses and dad completely supported her.

Sunday laundry was a family affair. There was no washing machine at home. So, mom would soak the clothes in a tub, dad would squeeze them out and we kids had a gala time in the garden, helping them dry the clothes.

Cleaning, dusting, doing the dishes, washing, cooking, every household chore was done by both of them and they involved us too.

To me, it was normal, until I stepped out and explored more. I met new people, new families and was shocked to see that not every family adopts this attitude of sharing the load. In some families, the male members would not even fetch a glass of water for themselves, forget about cooking.

On one such instance, we went to a friend’s place and our kids were playing. Suddenly, the little boy came running with a broom in his hand. He was playful but his mom snatched it away from his hand. What she said shocked me immensely. She said, “This is not your job, this is a girl’s job.” Then she pointed towards my daughter (who was not even a year old then) and said, “It’s her job.” Only I know how I controlled my anger at that time. I want my kids to grow up as strong and independent individuals. They don’t have to depend on anyone for anything. I encourage my four-year-old son to take up tasks that suit his age. He shows great enthusiasm and happily does what we say. For example, when we do laundry, he helps me putting the clothes in the washing machine and he has also developed the habit of keeping his used clothes in the laundry basket. He is aware of the beeping sound that the machine makes indicating that its done. Then, we go to the garden and together dry the clothes. We have a smaller clothes stand for kids, which he can easily access and he loves to dry his and his sister’s clothes.

Looking at him, my fourteen months old daughter also tries to imitate. It’s an adorable sight to see her pick up tiny clothes from the basket and hand them over to me. I am happy that we are already working as a family. 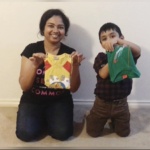 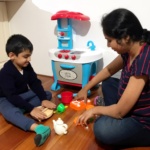 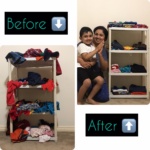 Make it a Habit #ShareTheLoad